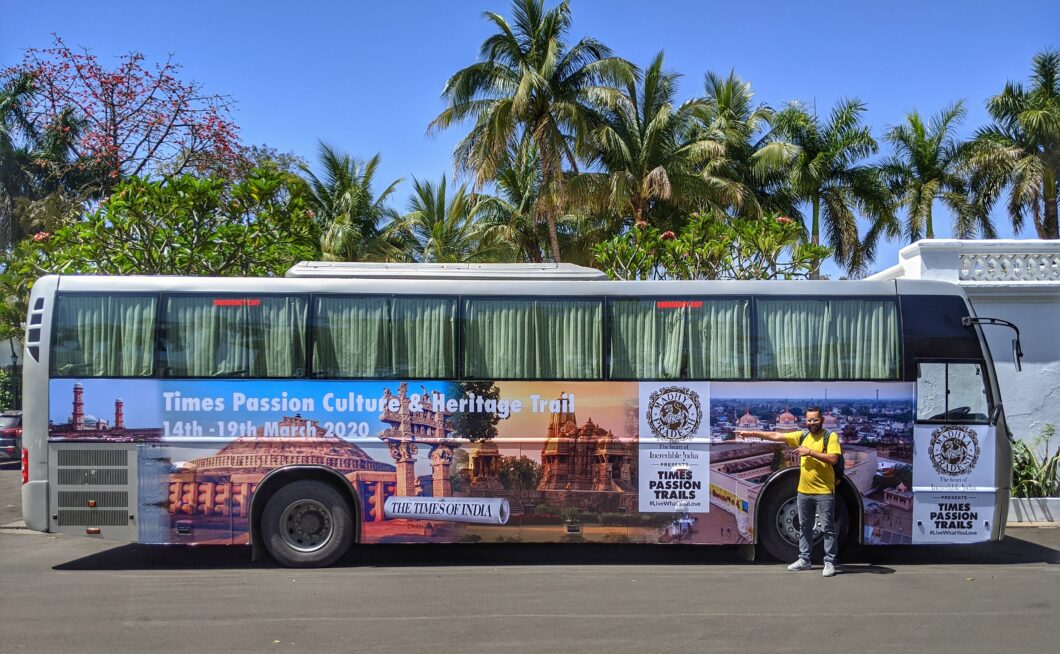 Today’s blog is going to be different because I’m going to share with you all about my last travel experience of Culture and Heritage Trail in Madhya Pradesh before the lockdown started.

The Trail started on March 14th from Bhopal and it ends on 19th March at Khajuraho, Madhya Pradesh.

I started my journey from Ahmedabad on 13th March and landed in Bhopal (the City of Lakes) on the same day in the evening.

It was also an interactive panel discussion with all the bloggers at Cocktail dinner held at The Senate Hall, Jehan Numa Palace.

We checked out and headed to Jehan Numa Retreat.

Other participants and influencers also joined us there for the lunch.

We visited Bhimbetka Rock Shelters which is an archaeological site spanning the great historic period. It has India’s oldest cave paintings which are approximately 30,000 years old!

The region is riddled with massively sculpted formations in the sandstone rock, making it worth a watch.

After that we moved towards Bhojpur to feel the aura of largest Shivling in the world. Yes, the Bhojeshwar Temple.

The Shivling is magnanimous & huge and made out of one single rock. The architecture around it, is so beautiful, that you can just simply walk around the Lingam and admire the remnants of the sculptures on the walls.

After visiting the Temple, we reached to the Jehan Numa Retreat for the Cultural Evening followed by special curated Palace food.

Well, this is how our first day ended- A day filled with history, spirituality, culture, and delicious food.

There, Mr. Jamal Ayub, shared the history of Taj-Ul-Masajid with us. He told us that the construction work of this mosque started in the reign of the Mughal Emperor Bahadur Shah Zafar in 1844.

After that we had a delightful sulaimani chai and moved towards the Sanchi to explore the Stupas.

Yes, I also crossed the Tropic of Cancer and clicked the picture as well. 😉

And finally, we reached to Sanchi Stupas! ☺

Fun Fact: Did you know, our 200 rupees note has a Motif of #SanchiStupa on the reverse side? Go, check your money & thanks me later for telling this. 😉

Coming back to some information, #SanchiStupa is a fine example of the development of the #Buddhist architecture and sculpture beginning from the third century BC to the twelfth century AD.

After visiting this important monument of Indian Architecture at Sanchi, we moved towards our next destination- The UdayGiri Caves.

The Udayagiri Caves are twenty rock-cut caves near Vidisha. And they contain some of the oldest surviving Hindu temples and iconography in India.

One of the caves in Udaygiri, features the inscription of 401 AD, and has sculptures representing the ‘Varaha’ or boar avatar of Vishnu, alongside Goddesses Yamuna and Ganga.

This Ganesh Idol at Udaygiri caves is one of the earliest examples of Ganesh Sculptures in India.

Ganesha eating a modak with his one hand, while his trunk goes after another modak. Udaygiri caves are made in fifth century AD and are an e.g. of Gupta art and sculptor’s sense of humour.

As the day comes to an end, we enjoyed magical evening at Sanchi Stupa.

I recommend whenever you are in Sanchi, please do not miss the Sound and Light Show in the evening time. It will give thrill to your senses and you will also learn about this ancient Buddhist World Heritage site founded by Emperor Ashoka in the 3rd century BC.

Third day of Culture and Heritage Trail started with Morning Breakfast at 8:00 a.m.

At sharp 9:00 a.m., we started our journey towards Chanderi.

Distance between Sanchi and Chanderi is more than 150 Kilometres and it took us more than 3 hours to reach there.

We reached there around 12:00 p.m. and firstly visited Chanderi Museum.

Chanderi museum preserves its heritage and culture intact through its museum. The museum features the actual sculptures and stone carvings from the bygone era.

You will also witness the remains of Jain temples from Thubon and Boodhi chanderi, most of which consist statues of different Tirthankaras.

After that, we visited Kati Ghati gate in Chanderi.

Standing high at 230 feet above ground level, Kati Ghati gate is 80 feet high and 39 feet wide. That spot is great for getting a bird’s eye view of the small town.

Our next place on the list was Badal Mahal.

The gate and palace is said to be built during the rule of Sultan Mahmud Shah Khilji. It is flanked by large fort walls and a beautifully maintained green garden.

The arched gate bears intricate designs and netted windows portray inferences of Mughal architecture. You can gauge the magnificence of the palace by looking at the gate and the route that bear testimony to the era bygone.

There is also a Jama Masjid in Chanderi just like Ahmedabad and Delhi, with a capacity of holding over 2000 persons at the time of prayer. It’s the largest and the oldest mosque in Chanderi.

Then we had an amazing and delicious lunch at Kila Koti.

After lunch, we visited a small monument, which is dedicated to the incident when queen and other subordinates of her, chose to burn themselves alive rather than get caught by the invading king army. The monument is just beside or at the back of the fort and hardly takes 5 minutes to visit.

This monument had been erected to remember the imposing ceremony of Johar performed there by a number of Rajput ladies on the eve of Babar’s conquest (A.D. 1528).

After that, we visited Master weavers of Chanderi Handloom and bought some amazing dresses and saris for family members.

Our Forth day of Culture & Heritage Trail started by cycling at 6 in the morning with all the other participants and bloggers in Orchcha.

During the Cycling, our guide took us to the great Baobab tree of Orchcha, and told that it still goes green in the monsoon season.

After that I experienced the Sunrise at Satdhara point, which is on the banks of Betwa River!

Moreover, we also visited the Ram Raja Temple in Orchcha. It is a sacred Hindu pilgrimage and receives devotees in large numbers regularly and is also commonly known as Orchha Temple.

In India this is the only temple where Lord Ram is worshiped as a king and that too in a palace. A Guard of Honour also held every day, police personnel have been designated as Guards at the temple, much in the manner of a king

So, I also took blessings of Shri Ram at Orchcha Temple.
Being a foodie, I also tried some local food like Bedai Subji, Samosa, Pakoda with Masala Chai!

I really enjoyed their street food after the tiring cycling session. It felt really refreshing!

Now it was time to explore the most popular attraction of Orchcha. I hope you have guessed! Yes, I am talking about Chhatris on the banks of River Betwa.

There are 14 cenotaphs (or Chhatris) in Orchha are tombs, in memory of the Bundela kings and the members of their dynasty. The first raja of the dynasty, offered drops of his blood to the Goddess Kali and was called Bundela – “One who has offered drops”. His decendants carried this name till the line was faded.

Well, afterwards, we luckily got the chance to meet the Royal Family of Orchcha the BundelKhand Riverside over the Majestic Bundelkhand Feast.

That royal experience was mesmerising and just after that, we started our road trip towards the Remarkable Khajuraho.

On our way to Khajuraho, we also explored the “Jarai Ka Math”. It is an ancient temple in Jhansi, which dates back to ancient era and is an excellent example of early Pratihara architecture. 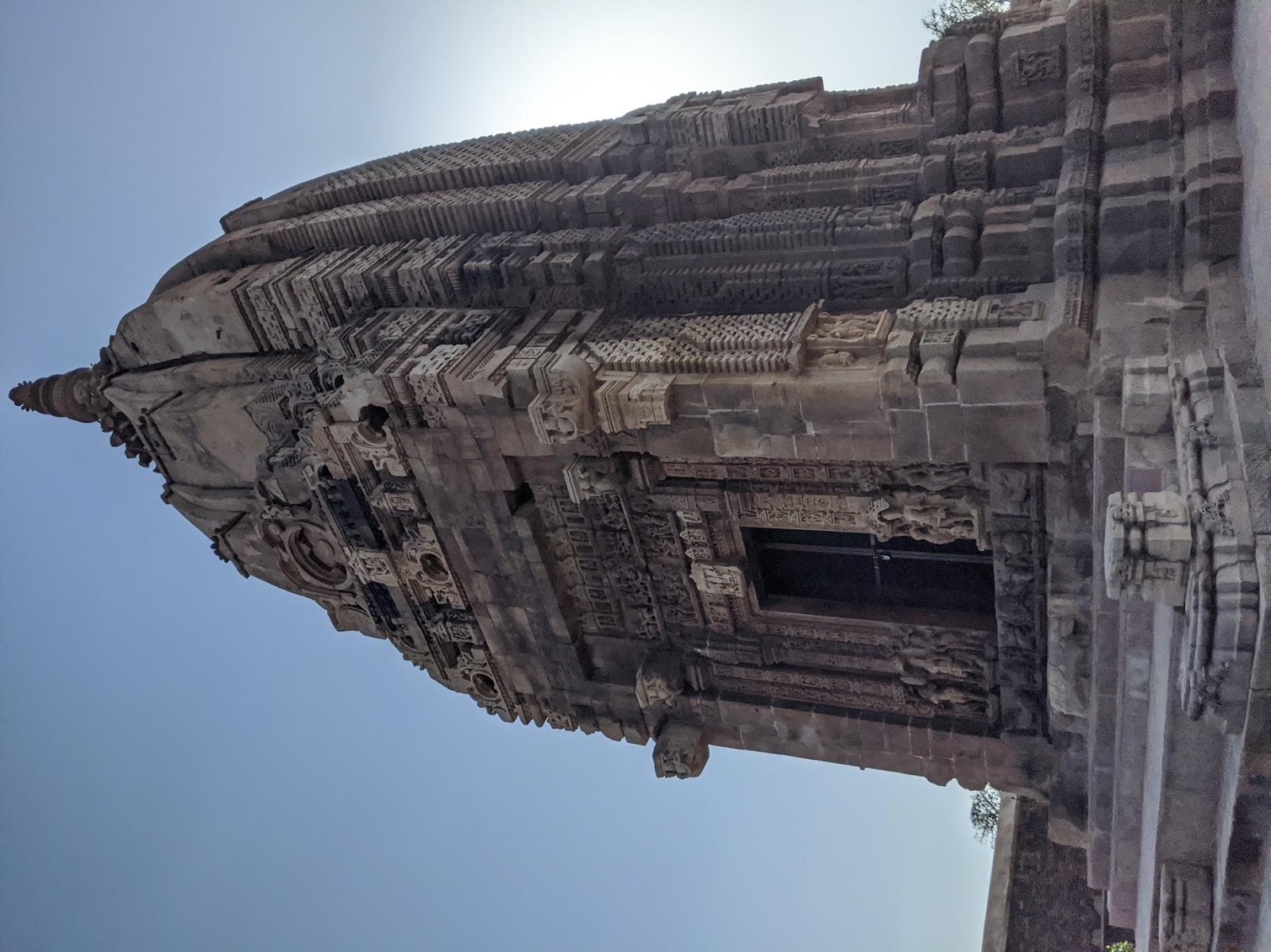 The temple is located in Barua sagar and is dedicated to Goddess Amba.

And finally, we had a wonderful night stay at “The LaLiT Temple View Khajuraho.”

Fifth Day Started with the History and Architecture of Shantinatha Temple in Khajuraho.

Shantinatha temple is a Jain temple located among the Jain temple cluster in eastern Khajuraho in Madhya Pradesh, India. While its main deity is the Jain tirthankara Shantinatha, it includes 18 shrines with numerous Jain images.

It is also included in World Heritage Site along with the Khajuraho Group of Monuments.

After knowing the unknown facts and history of Jain Temples, we moved towards the Matangeshvara Temple in the western group of temples Khajuraho. The interesting fact is, among the Chandela-era monuments of Khajuraho, it is the only Hindu temple that is still actively used for worship.

Lakshmana Temple is arguably the biggest and best temple in Western Temple complex in Khajuraho. There you will see some beautiful views and some architectural details of its exterior and interior parts. These details will enable you to look out for these particular carvings which are considered to be quite ‘saucy’.

Every part of this temple is heavily decorated with a variety of sculptures that allude to the pleasures, pastimes, lifestyle, desires and conquests of the Chandela dynasty.

After visiting the eastern and western temples, we left for the lunch at Kutni Iceland Resort which is inaugurated by Shri Prahlad Patel (Ministry of Culture and Tourism).

After the delicious lunch at Kutni Iceland Resort, we came back to The Lalit Temple View and took some rest.

Later, we enjoyed the Light and Sound Show by The Lalit Temple View and experienced a detailed and informative session by Anurag Shukla on the Western Temples.

And fifth day ends with the Felicitation ceremony (Memento Distribution) followed by magical night of Sufi by Dhruv Sangari aka Bilal Chisty Sangari.

That day, we visited the last temple of the trip, Duladeo Temple.

Surprisingly, the figurines carved in the temple have soft expressive features unlike other temples which make it a must to visit.

And finally, Trip ends with this picture:

I will always cherish this Culture and Heritage Trail!