It was 10th May. I was busy wondering about my vacation plans to escape the scorching heat of Ahmedabad when I receive this call from Mr. Amit Rao (yes, it was Amit calling Amit but alas Farhan Akhtar ;-)). I had heard of him and Rao Group of Companies but didn’t believe that he would just call me up. Ideally too, I would have expected a secretary of his to do it. But it was directly him. He was humble enough to give me his complete introduction and the details of his business.

He had some unique activity in mind that he wanted me to check out for. Somehow I had no such commitment during that day and I decided to go ahead with it.

I went down to his office and was expecting one of his managers to interact with me (after all he had close to 100 in staff and crores in turnover), obviously owing to his stature.

But what happened was he directly had me walk down to his cabin and would have spent not less than 3 hours explaining about his upcoming activity campaign that was meant to teleport people with Virtual Reality (VR). It had lesser of any marketing agenda and more of the fun element for people at large. Sounded amazing. I was instantly hooked for.

Most of the businesses give free trial products and so here was this business that wished to give a virtual trial of abroad destinations. Wonderful!

Mr. Amit Rao wanted me to be a part of those specials guests whom he was personally inviting around, which including few prominent RJs and Ahmedabad-level celebrities. There was no commercials  exchange, simply few brilliant minds getting together to do something that would make people go ‘wow’.

A day later, I put across few Facebook posts and Twitter tweets as I wanted my fan following to know about it too. After all the event was free, and I was excited that an Ahmedabad based company was taking such initiative.

The event was on 12th May, but to my unfortunate, my dad had to be hospitalized the same day morning due to some pain in stomach. I had to drop Mr. Amit Rao a message about it. He was genuinely sympathetic about it even though we had met only once before this interaction. Even I had no qualms as my family means the world to me.

But somehow, my dad got discharged from the hospital by noon (by God’s grace). I immediately shot of message to Mr. Amit Rao again informing him that I am going to crash land at his activity site. He was pretty chilled about it and made sure that everything at my side was pretty sorted. I said ‘yes, don’t worry… I have balanced off my task as son well’.

I landed at the venue which was Alpha One at Vastrapur and was amazed to see a crowd of not less than 100 thronging around the stage to get that feel of VR. Besides the audiences were few familiar faces, few RJs and a very warm crew of Rao Group of Companies. 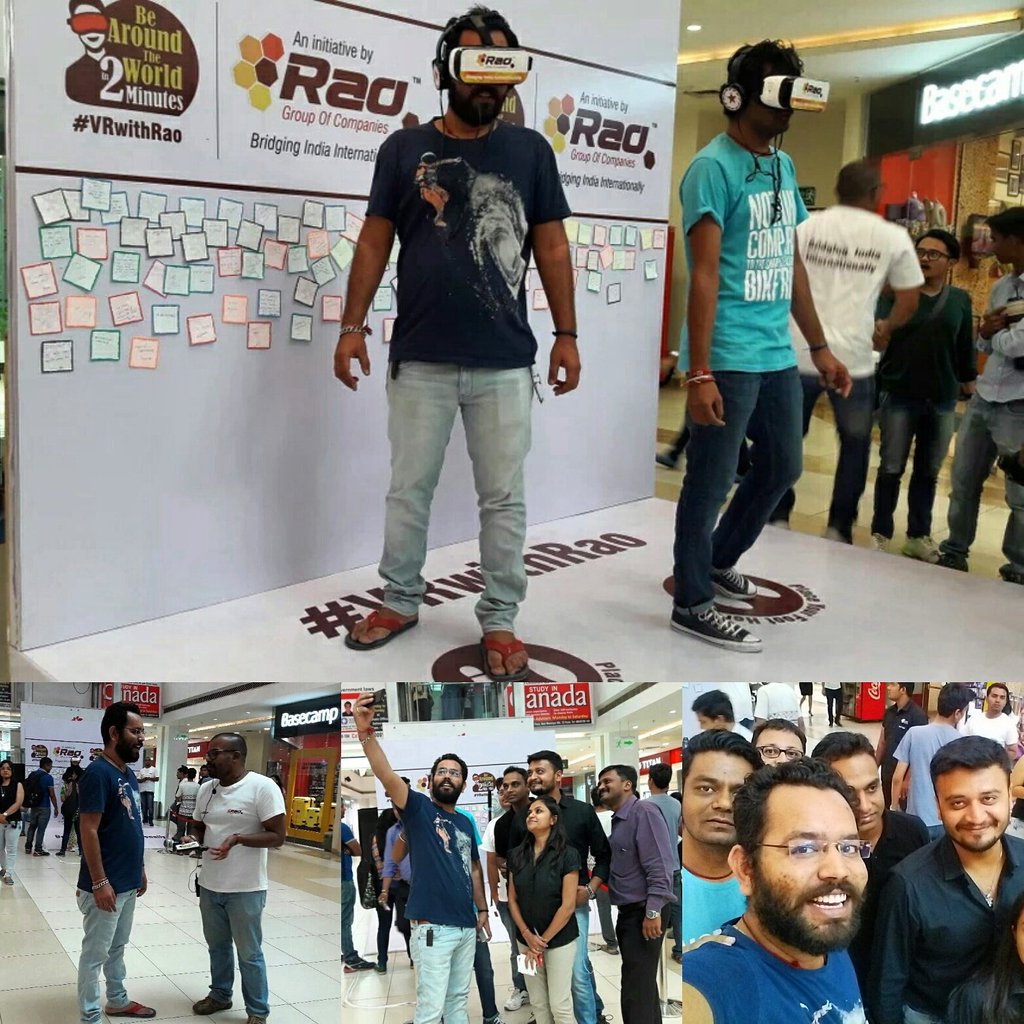 I was immediately given a green channel entry that let me by-pass the long queue of VR aspirants, and gung-ho when the VR glasses were put on, I was genuinely amazed. The entire experience that began for the next 2 minutes simply blew off my mind. From the streets of Ahmedabad, I was teleported to the streets of Times Square, NY.  I could see people passing by me, I could see those flashy billboards, I could see a taxi halting by for pickup and I could also see that famous semi-nude guitarist playing right near to me. Wow, what a feeling! When the 2 mins ended and the Oculus (the VR Gadget) was pulled off my face, it took a couple of seconds for me to realize that I am back to where I was (ie. Alpha One).

What was more amazing was those audiences around who had seen me doing all those funny actions when I had the Oculus put on my face. While I was in that different world, they had fun too viewing me doing nothing less than a comedian.

I simply loved the experience!

In that meanwhile, an event anchor walked down towards me. Before he could ask me anything, I shot him first, ‘What made you do this?’ He immediately replied back, ‘Our business of Rao Group of Companies has got to with sending people abroad and we have been doing great in last 14 years. We now wanted to teleport those who might not have been and would like to see it first, before then go in real.’  I was impressed. The anchor showed me this tagline of theirs which was, Bridging India Internationally. It truly lived up to it.

In that meanwhile, Mr. Amit Rao walks towards me. Before we discuss further, I again shoot him first saying, ‘Boss, enjoyed. I am glad you got me here. I am really really delighted and I am definitely sharing this experience with my fans and friends.’

So here I am writing this blog after a long time sharing my experiences. In the meanwhile, Mr. Amit  Rao’s team has pulled up some extraordinary video of this event which further blew off my mind.